Tourists and pilgrims despairing about finding a genuine souvenir of their visit to the Holy Land that wasn’t mass-manufactured in China, India, Turkey or Egypt might wish to consider visiting the Bethlehem Icon Centre – the only school in the Middle East that teaches the ancient Christian tradition of iconography.

Established by Ian Knowles in 2010 to encourage Palestinian Christians to stay and pray in Bethlehem and the adjoining cities of Beit Sahour and Beit Jalla, the not-for-profit atelier trains locals from the birthplace of Jesus to become professional artists specializing in the arcane field of painting Christian holy theme images.

To date, Knowles, 53, has accepted 18 trainees, 10 of whom are currently being trained. Two of those students are enrolled in a new diploma program offered in association with the Prince’s School of Traditional Arts (PSTA) in London. Tuition is free. Knowles guarantees graduates a job at his workshop.

Born in Cheltenham, England, Knowles is passionate about his oeuvre. “It’s sacred art,” he says matter-of-factly. “It needs to be done in a spiritual way.”

Uncompromising, he insists that his students achieve an international standard. Unlike copyists who churn out faux icons one can find in Jerusalem’s Old City and other tourist venues, students at the Bethlehem Icon Centre learn to design and execute original works of art. Classes – which are technical, theological and spiritual – are deliberately kept small so that each student gets individual training to build up their skill base and encourage their creativity. The curriculum includes anatomy, drawing techniques, sacred geometry and design, calligraphy, and the faces of men and women, as well as Jesus’ visage. Students progress from pencil sketches to monochrome studies in egg tempera.

“Icons are liturgical art,” Knowles explains of the art form shared by mainstream Eastern Orthodox Christians and Roman Catholics, as well as by smaller Middle Eastern denominations like the Copts and Melkites.

“Icons are art designed for space where Christians pray publicly. They make visibly present that which is invisible. It’s a way of praying with your eyes. When you put an icon in your living room, it’s like putting a little bit of a church in your home,” says Knowles.

Icons contain a code or symbolic language, he continues. For example, shadows are always depicted as a way of suggesting interior and divine illumination. “The light is coming from within.”

Similarly an icon must contain text, often written in Greek from the New Testament and sometimes inscribed in abbreviation. “Otherwise it’s just a devotional painting,” he adds.

The icon school is located in the picturesque Khosh Abu Jarour. The derelict 19th century courtyard on historic Star Street in Bethlehem’s Old City was restored in 2014 by Bethlehem’s Centre for Cultural Heritage Preservation, with funds from US AID (American International Development).

“One of the key things for the school is to be a place of normality with a sense of hope and trust. It’s very bizarre here with the wall and the occupation that has gone on for so long. And that has a corrosive effect on people’s spirituality,” he opines.

Currently Knowles is working on a two-meter wide semi-circular icon for the local Melkite parish. Before he can begin painting, he applies 12 layers of gesso on a plywood board. He only uses traditional paints and materials, including a vivid blue made from lapis lazuli, and gold leaf. Commissions begin at NIS 2,500.

Knowles studied under Aiden Hart, who now teaches iconography at the PSTA in London. The institution, established by Britain’s Prince Charles to encourage age-old craftsmanship, recently finalized a partnership agreement with the Bethlehem Icon Centre.

Knowles attributes his work to being in the spirit of the earliest icon art which was created at the Santa Katarina monastery at the foot of Mount Sinai in Egypt. His icons, which are always left unsigned, reflect the influence of the Russian icon master Archimandrite Zenon, he adds.

Over the centuries icon painting has moved between naturalistic and abstract. The latter is currently in vogue among Greek iconographers.

As well, throughout Christian history there have been several iconoclastic movements which deliberately defaced religious art as sacrilegious. Five centuries ago the Protestant Reformation rejected icons as idolatrous graven images. In England, for example, Puritan iconoclasts destroyed an estimated 97 per cent of the country’s religious art during the English Civil War.

“We’re continuing the traditions of the Holy Land,” Knowles smiles. “Here we are building something of hope, rooted in the revelation of God’s love, in a region where hope is something in very short supply.” 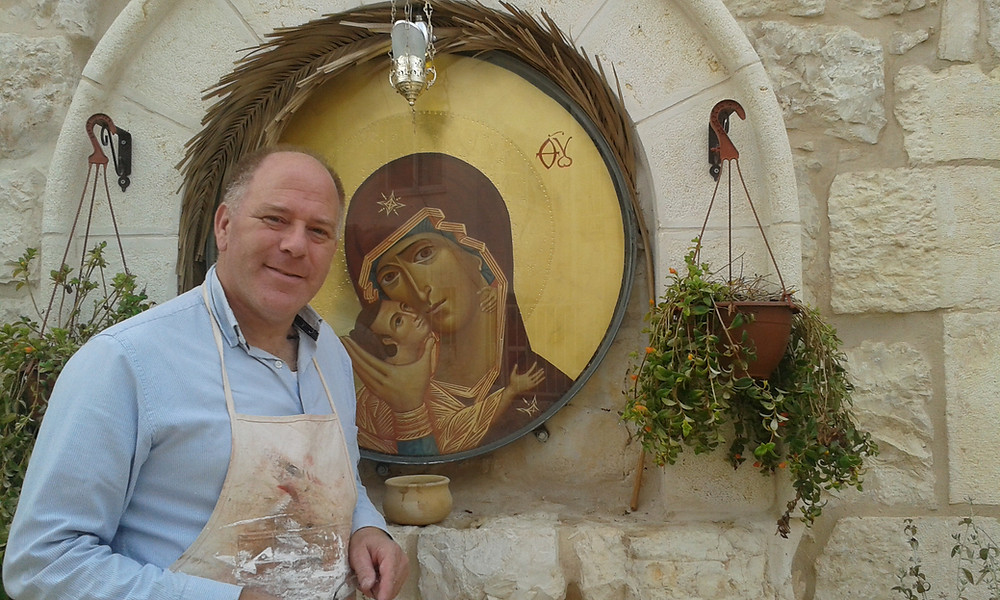