With Tisha b’Av and the three-week period of mourning associated with the destruction of the two Temples in Jerusalem over, the summer’s wedding season began this week. And one of the most festive weddings this writer has ever attended was the nuptials of Kuwait-born Mark (Mordechai) Halawa and Finland-born Linda Brunell that took place Wednesday at Nes Harim in the Judean Hills.

Officiating was Rabbi Israel Weisel of Bnai Brak. Among the hundreds of guests were streimel-wearing Belzer Hassidim, sun-burned Swedish Lutherans who had flown in from Scandinavia in a demonstration of Zionist support and family ties, and friends from Abu Dhabi.

Halawa, 36, spoke about the divinely-ordained path that brought him back to Judaism.

His grandmother, Ruwaida nee Mizrachi, was born in Jerusalem during the British Mandate of Palestine. She married Muhammad al-Masri. a Jordanian soldier from Nablus, and the couple ended up stationed at Zarqa, Jordan. Following the 1970 Black September uprising, al-Masri – who was a high-ranking officer in Jordan’s Arab Legion - was cashiered when King Hussein purged his army of Palestinians. The family relocated to Kuwait.

Thus Halawa’s mother, whose name Mark prefers not to cite, moved as a teenager to Kuwait. There she met and married her husband, whose name Halawa similarly declines to mention. Opening an engineering and contracting business, the family grew wealthy on government contracts from Kuwait’s ruling as-Sabah clan. But the good times came crashing down in 1990 when Iraqi dictator Saddam Hussein occupied the tiny Gulf emirate.

Halawa’s family, which was on vacation in Spain when the invasion of Kuwait took place, became exiles. They ended up in London, Canada, where Mark studied psychology and business at the University of Western Ontario. There, in a fateful meeting at the school’s library, he fell into a conversation with a long-bearded professor of philosophy named Yitzhak Block. After considerable probing, the Chabad rabbi pronounced Halawa halachically Jewish by virtue of his being the descendant of a Jewish woman. Halawa protested that he is a Muslim.

But the truth won out. After much soul-searching, Halawa moved to Toronto where he joined the Minsker Congregation in Kensington Market, and began studying at Aish ha-Torah’s outreach center in Thornhill. In 2011 he first visited Israel, where he immediately felt at home. Continuing his studies at Jerusalem’s Aish ha-Torah Yeshiva, he returned to the fold of Jewish life.

Linda Brunell’s family story is equally extraordinary. Her father Ole Brunell was born in a Swedish-speaking village on the west coast of Finland. Growing up in an insular community, he attended seminary and university in Turku, Finland, and was ordained as a Lutheran minister. After leading several congregations across Finland, he and his family relocated to sunny Australia to minister to a Finnish-speaking church in Brisbane.

But Brunell and his wife Runa began to question the theological underpinnings of Christianity. Finally in 1991 he renounced Christianity and left his job as a minister, along with its car, vicarage and status. After a long and difficult path, the family converted to Judaism and made aliya in 1996. Ole and Runa became Shlomo and Ruth. All four of the Brunell daughters have married Israelis.

Linda Brunell works as a patent paralegal with a major Tel Aviv law firm. Mark Halawa is a businessman with extensive contacts and dealings across the Middle East. He also is a speaker on the Chabad circuit in North American and Britain.

“This is the happiest day of my whole life,” Brunell said. “Mark and I share the same goals, despite our different backgrounds, of building a family in Israel. I’m very grateful to my parents for bringing my sisters and I on this path. And I’m sure they’re happy to have their last daughter married off.”

“Many people asked Linda and me, ‘Where are you going to get married?’ Is there a better place than the land of my ancestors? I’m only sorry that my immediate family isn’t here, but I’ve gained a whole new family – the whole Jewish people is now my family,” said Halawa. “My dream of marrying a Jew and establishing a Jewish home has become a reality. Baruch ha-Shem.” 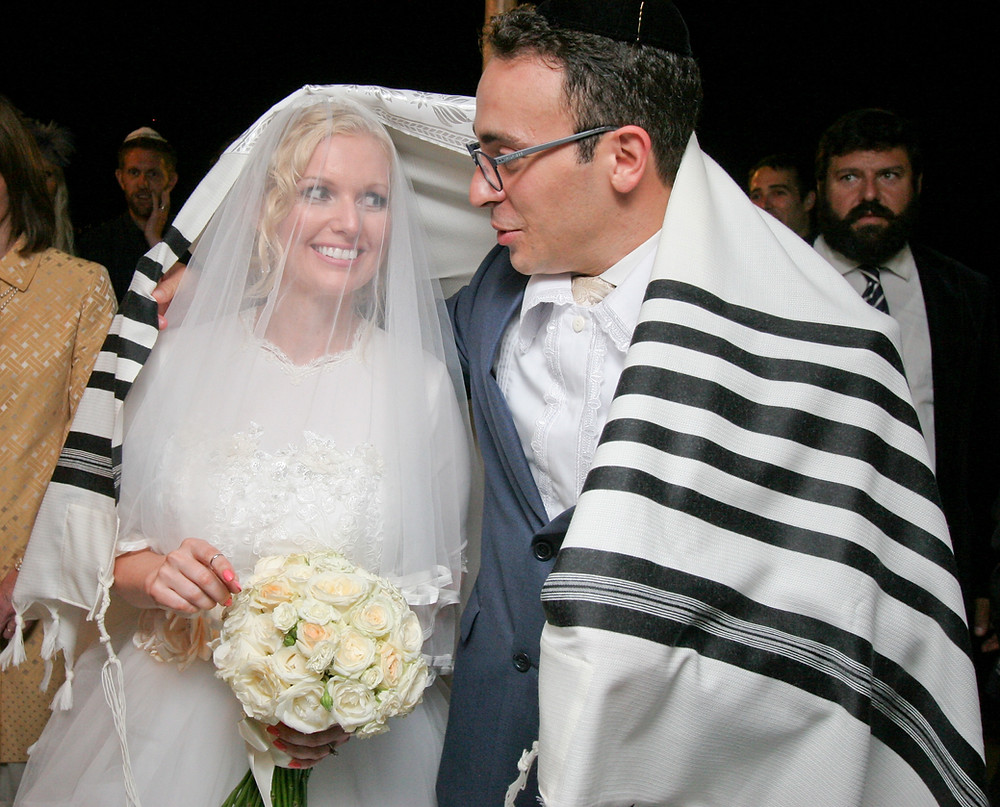